So Many Ph.Ds...So Few Jobs

I'm going to read the whole thing this weekend and will probably have more to say about it in future posts, but the newest NSF Survey of Earned Doctorates is out, and the picture about jobs isn't a pretty one.

According to the IHE, the percentage of folks who graduate with Ph.D.s and have firm employment commitments on hand at graduation has fallen sharply ... across every discipline.

Here's the table from the IHE article, which is drawn directly from the report: 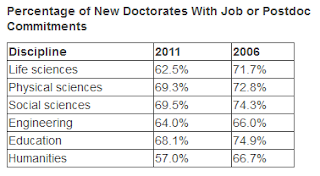 (Side note - I am really surprised to see that the percentage of new grads with job commitments is highest among social scientists. Though I suppose if you include economists and psychologists in that group, you may be catching a number of people who are moving into industry. But still...).

At any rate, these numbers are pretty scary. Note that the comparison year is 2006 - which is at least a year or two before the academic job market is perceived to have started its collapse.

And as everyone knows, the next few years were awful. Fewer schools had money to hire new faculty, and many schools cancelled their searches when they were already underway. Graduate programs (like mine) where students who graduated in 2004 or 2005 were often mulling over 2 or 3 job offers as ABDs were suddenly seeing students who got nothing more than a single VAP offer or (if they really got lucky), an offer from a school that was at the end of their desirability list.

But now, in 2011 and 2012, we keep hearing that the market across multiple disciplines is rebounding. There are more job listings than in previous years, and schools are finally getting the go-ahead to hire tenure-track faculty. Don't worry, Ph.D. students! Everything is back to normal! Just keep working hard, and it'll all work out!

But as these numbers suggest, everything isn't working out for everyone. Fewer new grads have job commitments than in the past, when the academic job market was supposedly in its heyday.

Now, it's important to note that I don't think anyone is lying when they post these articles about the job market. I believe that there are more new academic job postings coming out in 2011 and 2012 than there were in 2007 and 2008. I also believe the NSF's numbers - that many new Ph.Ds are graduating without jobs. So what's going on?

I have a feeling that the hiring numbers look particularly bad for new grads because people who graduated years ago are now looking to jump ship from their first (less desirable) jobs into better ones ... or to move from the temporary positions they were forced to take in 2008 into their first tenure-track jobs.

So when brand new Ph.Ds graduate, they simply can't compete with the assistant profs from Kinda Crappy University, who have several years of faculty-level publishing and grant-writing and teaching under their belt. It's nothing anyone is doing to anyone else on purpose, of course, and it doesn't mean that the new grads are not impressive scholars who will go onto great careers. It's just the way the market looks now.

But making excuses about why these patterns are happening does not change the reality that the job situation for new Ph.D grads is not good. The market has not "rebounded" for them. 3 or 4 of every 10 folks graduating with a Ph.D are looking with anxiety at that scary date in the summer where their health insurance will run out and their last academic paycheck will come in, and where they won't have the opportunity to hang back and stay in grad school for one more year.

They're facing unemployment ... after years and years of making barely five figures and without the possibility of being able to earn an unemployment check if they can't find work.

Because, as universities are all too happy to remind graduate students who have tried to unionize - the people who teach and do research at their university without the prefix "Dr." are not employees.

From the linked article:


New York University's brief challenges the idea that the unionization of research assistants should even be a consideration in the case, arguing that they do not provide services in exchange for compensation and are simply performing the research required by their academic programs.

Now, I don't want to derail this post with a discussion of labor economics and graduate education, but I do want to make the important - and often overlooked - point that since graduate students are not typically considered employees, their situation is particularly dire if they wind up unemployed after graduation.

If the company I work shuts its doors tomorrow, I could march down to the local unemployment office and file for benefits. The benefits wouldn't replace my entire salary, but they would likely make it so that my partner and I wouldn't lose our house and could afford food until something else comes up.

But graduating Ph.D. students with no employment prospects cannot go to the unemployment office and file a claim for part of the wages they earned while "working" for the university. Because the university would simply say that they hadn't been working, and therefore that they don't qualify for a couple hundred bucks a month in unemployment compensation.

(Then the university would undoubtedly continue construction on their multimillion dollar information technology building named after a wealthy donor, and on the hunt for a new Vice President of Student Informational Services who will earn in the mid six figures. But I digress.)

So what waits for these desperate new Ph.Ds who are about to lose their income and their health insurance and their institutional affiliation (which will, of course, affect their ability to do research and attend conferences and have an impressive CV)?

That's right ... adjuncthood. Or maybe if they're really really lucky, a one-year VAP position in some cow town hundreds of miles away from their family and friends. Just like every entering Ph.D student dreams of, right????

But what's the alternative when you have no chance to draw unemployment and no chance to further your academic career if you aren't affiliated with a university? There simply isn't one.

My major point, then, in looking at these numbers is that they are not just an interesting data point to ponder. Included in that 30-40% of new grads are people with families and bills to pay and who have spent the last 5-10 years of their lives working hard - incredibly hard - for a university that is all too happy to slam and lock the door behind them when they graduate without a job. "Didn't get anything this year? Oh well. Go find an adjunct position and then publish eight more papers and everything will be fine! Go on, now! Get out; we've done our duty to you!"

And then - then - on the front end? These programs are admitting full classes of new Ph.D. students, who are eager to study their beloved discipline and just "know" (and are repeatedly told) that "the job market will just work itself out."

And then by the time they get to the end of their graduate careers and see that nearly half of their cohort-mates are failing to land jobs upon graduation? Well, you should have worked harder.

It's gotten to the point where I weep for new Ph.D. students who have no idea what they're getting themselves into. If things look this bad now, how bad are they going to look in another ten years??

Something has to eventually give in higher education. Unfortunately, these numbers have me thinking that "something" already is. A class of desperate Ph.D. grads who can't find jobs and can't pay their bills are there, ready to snap up any temporary contract positions that a university will give them. The university saves money by not paying a fulltime faculty member, and the classes still get taught by someone who is eager to do a good job. From a university perspective, it's a win-win!

Unfortunately, it is not a "win" for those faculty, or for Ph.D students. But who cares about them, right? It's not like they're "employees" or something. Siiiiiiiiigh.

I'll have more later, once I have a chance to look through the entire report.
Posted by JC at 11:32 AM

The Two Types of Postacademics

Wow, it looks like after about ten days of no posting, I'm feeling quite talkative lately! Happily, though, my thought processes have ...

JC
I am a former grad student in the social sciences, who quit academia in 2011. I now blog here, as well as at http://www.howtoleaveacademia.blogspot.com. Like what you see? Buy our ebook, "Moving On: Essays on the Aftermath of Leaving Academia." Available on Amazon!